Most of us in the telecoms world will be au fait with the UK’s progress towards deploying 5G. Following in the footsteps of EE and Vodafone, this week, Three launched its own 5G network. But unfortunately, the UK operator has already landed itself in hot water over its 5G advertising. A recent advertisement emblazoned with the words: “If it’s not Three, it’s not real 5G”, was met with complaints and deemed to mislead consumers.

So, as the Advertising Standards Agency (ASA) decides whether Three’s claims are misleading, I have a question: are any operators actually telling the truth about 5G? I’m not so sure.

In the UK alone, consumers have been bombarded with advertising unveiling a new, exciting 5G network that is faster than ever before. EE says, “5G is here” while Vodafone has embraced a “catchy” new hashtag: #5Gamechanger. But nowhere, except in the very, very fine print, do any of the UK operators admit that while 5G is “here”, it’s not really, really here. In fact, much of the marketing speak makes it seem as though I could purchase a 5G phone tomorrow and benefit from ridiculously fast download speeds, anywhere in the country.

That’s not the reality, however. Much like previous generations of wireless technologies, 5G will be deployed using a piecemeal approach – it won’t come in one fell swoop, so for operators to claim that they now have 5G is very misleading. If you own a 5G device today, the likelihood is that you are getting excellent speeds (varying between 100mbps and 200mpbs, compared to 10-20mpbs with 4G), albeit in a very, very small geographical area. But outside of that very small, very restricted geographical space, you’ll be kicked straight back onto 4G. And speaking of 4G, the current specifications of 5G currently being deployed is non-standalone; that means that 5G is essentially still supported by a 4G core network. So, really what we’re getting today is a 4G to 5G hybrid.

According to industry experts such as InterDigital, real, fully interoperable mobile  5G won’t come to be until at least 2025. It’ll only be then that consumers (and businesses) alike will start to really experience, and benefit from, 5G’s technical capabilities. Until then, we’ll continue to enjoy a 4.5G experience that has the look of 5G but doesn’t quite deliver – a bit like a fake McDonald’s, it looks the part, but the taste just isn’t quite the same.

So, should operators be allowed to make such extravagant 5G claims? With the pressure now on to monetise 5G, they probably don’t have much of a choice. But it’d be nice to see them make an effort to be a little more honest about the experience consumers will actually receive today and in the coming years. While “tricking” consumers into 5G may help boost adoption rates, it’ll do little to convince consumers that operators have their best interests at heart. As the saying goes, honesty is the best policy. 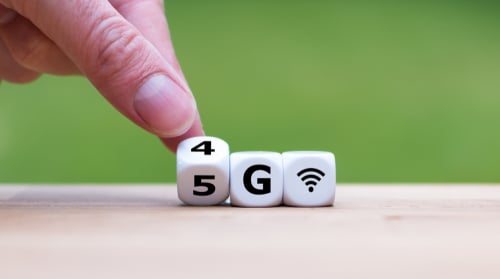