Social distancing has forced everyone inside and, as a result, conferencing is now essential for businesses and individuals alike to function. Whether it’s for following up on team meetings or grabbing a quick ‘quarantini’ with your mates - video conferencing is making it all possible.

For example, Microsoft Teams shot up in users, so much so that basic functions like messages temporarily ceased to function in the early stages of the UK lockdown.

While it gained attention for its popularity, so has it revealed it’s vulnerabilities. Some bad actors have begun ‘Zoom-Bombing’, an act which involves infiltrating a private Zoom conference call and viewing the business meeting, or worse, in some cases sharing pornographic images and content.

There are, of course, many alternatives. RingCentral, and Google Hangouts  to name a few, are being favoured by enterprises for their more sophisticated offerings, providing messaging apps and other functions. However, there are some more adventurous conference-callers that have found a left-field option with the freemium multiplayer game Fortnite.

Developed by Epic Games in 2017, Fortnite is one of the most popular ‘Battle Royale’ style videogames ever. It exploded as a free game in 2018. The game involves being dropped onto a large island with 99 other players all racing to gather as many resources and weapons as possible before gearing up in a vicious cartoon-like battle to be the last one standing.

Along it’s ‘Battle Royale’ mode players can have private teams battles in ‘Squads’, and ‘Creative’ mode.

But how do you have conference calls?

As a free cross-platform game, it offers an easily accessible open-world to have a meeting. As mentioned above, you can host a private meeting in its ‘Creative’ mode for up to 16 players for a limited time of 60 minutes. This means every executive can live their dream of having a private island with a number of ideal meeting locations.

From the luxurious offices currently available at the Agency:

Or the tropical views from the apartments at Sweaty Sands: 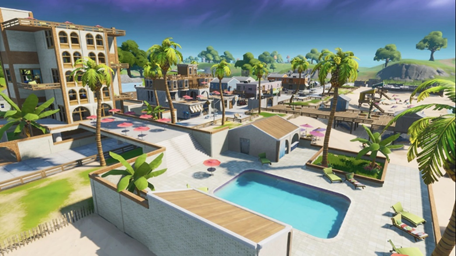 Why is it a good alternative?

According to the Telegraph, a number of financial investors are already using the game as a way to meet start-ups. They’ve reportedly been using Matchbox.vc, a company that connects venture capitalists to start-up executives through video games and other means. Since the lockdown, the service saw a 63pc increase in gaming sessions.

Aside from the obvious fact that this is a shooter game, made popular by young people (the game exploded in 2018 reporting 125m players one year after it’s launch), it also provides a less than traditional and interactive way of holding private meetings. Where everyone is now eternally confined to their homes, Fortnite might provide some much-needed escape.

In terms of security, Fornite encourages users to use multifactor authentication on its website and rewards users with an in-game emote for doing so. Unfortunately, it doesn’t supply much more on how it protects users.

What are the issues with Zoom?

The app has a troubling history when it comes to security and privacy. Last year, Zoom was found to have a flaw that allowed hackers to activate someone’s webcam without them noticing. In addition, even after a user uninstalled the app, the software left a web server up and running, allowing for an automated install of the app if someone invited the user to a Zoom call. This has of course been followed by ‘Zoom-Bombing’ and a lawsuit where the app has been accused of illegally sharing users’ personal data.

The Ministry of Defence has even issued advice against using Zoom warning of its vulnerabilities, however, that’s not stopped Zoom being the app of choice for the Government.

That said, Fortnite is not without its own flaws. The game found itself the victim of its own data breach in 2019 exposing nearly 200 million users to being hacked and secretly recorded during play. According to CBS, hackers discovered a security flaw on a 2004 webpage by Fornite’s developers that enabled threat actors to set up phishing scams under the guise of Epic Games. The vulnerability later allowed hackers to take over accounts and make purchases.

For now, Fornite is supplying much-needed entertainment for what has been a turbulent time for people and businesses. Gamers and non-gamers alike have been given the chance to escape the home office for a more entertaining, less formal, working environment.

In many of the conversations with our clients we have discussed that no matter what happens, the way we do business has been permanently impacted. Not only are businesses being driven by altruism to offer free software, but some are forcing innovation in sectors they wouldn’t normally operate in. The ExCel is now London’s largest hospital, Mercedes is making ventilators and Brewdog has its own range of hand sanitiser. What’s next? Will Cisco become the largest distributer of face masks?

In the conference calling sector, it would not surprise me if we were to see more cross over between video gaming and video conferencing in the future. People will strive for more interaction under forced isolation and it might be time for VR and AR to make its move. Just last month I went to a VR arcade where I was transported to an island, a zombie infested city, and a cyberpunk squash arena. Surely this WFH nightmare will kickstart investment into technologies that may make working from home more like ‘Ready Player One’. Or am I just being too hopeful?

Matt joined CCgroup after spending four years studying PR at Bournemouth University. Early on he showed an aptitude to integrating PR theory into practice and has been instrumental in CCgroup’s strategic and results-driven approach to measurement. When he’s not working, you’ll tend to find him travelling the world on his motorbike.