Is the battle for viewers all down to The Cry for content?

There was a lot of speculation as to how Netflix was going to fare when it announced its Q3 earnings this month, thanks to an underwhelming Q2 that saw the company miss expectations on both revenues and subscribers. But it seems that the OTT streaming giant had nothing to worry about—it exceeded expectations and trumped its conservative forecasts, adding seven million new subscribers and ending last quarter with more than 137 million subscribers worldwide.

Netflix’s high has, however, come at the expense of others— AT&T saw almost 300,000 subscribers abandon their television subscriptions in Q3, in favour of internet services like Netflix.

And it’s not just AT&T that is unhappy with Netflix and how it is doing business. Earlier this month, the BBC’s director Charlotte Moore slammed rival media giants, saying that their “insatiable greed for data-gathering” is harming viewers, and that “the television landscape is increasingly being defined by what will deliver the biggest profits, not the best programmes for audiences.”

Much of Netflix’s success has been put down to its content—and it’s an area that the OTT provider continues to invest in heavily. Not only has it been reported that this year alone it will spend around $13 billion on content, this week it announced plans to raise $2 billion to fund content.

But the BBC is certainly giving Netflix a run for its money. The concluding episode of the BBC’s drama Bodyguard has become the UK’s most-watched episode of any drama series across all channels since current records began in 2002. It’s also been experimenting with binge watching, making whole series available on iPlayer, with great success—Killing Eve is said to have had 26 million iPlayer requests.

Although the BBC might be seen to be taking some tips from the OTT giant, Charlotte Moore believes that while “audience data and algorithms are great and incredibly useful…I don’t believe any amount of data can tell you what to commission next. As the incentives of the biggest players become ever more commercial and cautious, ours need to become ever more creative and bold.”

It comes as no surprise that the battle between broadcasters, telcos and OTTs continues to make headlines, especially as subscriber numbers can make or break a business. More competition in the market means players like the BBC need to do all they can to make sure they are relevant—and creating more great content appears to be high on the agenda for the broadcaster.

The foray between broadcasters, OTTs and telcos continues to be an industry wide talking point, and is an issue we explored last month in our report “From transmission to attrition? How telcos and OTTs are disrupting the traditional broadcast market”.

It’s clear that OTTs and telcos direct relationship with the viewer puts them at an advantage, but that’s not to say that this makes broadcasters redundant. Ultimately, each player needs to play to their strength. And while for Netflix that may be utilising subscriber data to determine which new content will be a hit with viewers, broadcasters have the upper hand when it comes to local content—something that Charlotte Moore is keen to maximise, as she says that the BBC’s focus “must become more local.”

As competition in the market heats up, telcos, OTTs and broadcasters are all keen to show how they are different from their rivals. So, while the BBC’s focus is on content and greater personalisation, Sky is taking a different approach, and has decided to partner with ‘the enemy’ to incorporate Netflix content into its EPG (electronic programme guide). It seems that while some see new entrants into the market as competition, others see them as allies.

But ultimately, it’s vendor technology that these players will turn in order to differentiate—whether that’s personalisation and recommendations technology, EPG technology that helps drive revenues, or AI and machine learning that helps to unlock efficiencies. Which means that while headlines focus on the big players, MediaTech vendors must recognise their importance in the market, and the role they also play in this battle.

Industry rivalry will continue as new players enter the market to not only take on the broadcasters, but the OTTs too. As the saying goes, content is king—viewers care less about the channel, network, platform or provider, and more about the content they are watching. So, if Netflix’s success is what leads the BBC to develop great content like the Bodyguard, Killing Eve and The Cry, then long may the battle continue, I say… 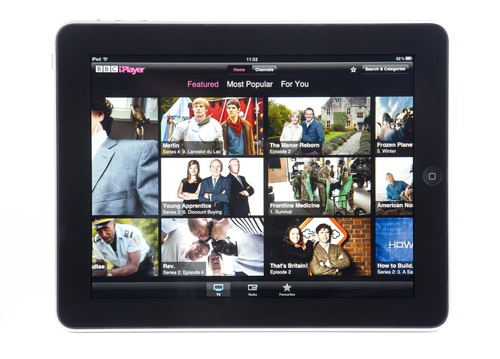