Leadership, Women4Tech and the gender gap: let’s talk about it

Over dinner at Mobile World Congress a colleague asked me a fair question: Do you feel like you are challenged as a woman in the technology industry?

I had spent all day at the GSMA’s inaugural Women4Tech Summit, and was recounting some of the great anecdotes and ideas both male and female speakers had shared on stage.

My explanation was this: I love working in a company where I am judged on my own merit and my gender doesn’t come into it. I like my colleagues to see me as a professional, and not necessarily as a professional woman.

But I’m also not naïve. I know that I’m lucky to work in an environment where this is possible. I also know that despite my company’s best efforts at recruitment, until very recently there was a lack of available women in senior positions that I could look up to and learn from. And this is indicative of the wider industry.

The issue of female representation in the tech industry (and the gender gap in many other industries) is a thorny one. Some initial reactions to events dedicated to women in tech range from eye rolls and questions of “Why does there have to be a conference devoted to this?”, to a convenient “I don’t really believe in this whole women in tech thing. Gender shouldn’t matter, it should be based on merit”.

Of course it should. But that’s not always the case, and that’s why these events are an important forum to talk about this in the open. Because it’s not going to go away by ignoring it. A handful of stats mentioned over the course of day very clearly demonstrated that:

So rather than hammer home yet more reasons why we should talk about it – let’s actually talk about it. Women4Tech was refreshing in that rather than simply lamenting the lack of female representation, the panels did their best to offer tangible advice on how to promote women to leadership roles within the industry, and to convince more women that a career in technology is not only an interesting and dynamic move, but also a viable one.

The four themes that really stood out for me over the course of the day were sponsorship, normalisation, networking and promoting a leadership mind-set. I’ve included a quick recap of excellent points well made by the panellists on each subject below.

Standing on the Women4Tech stage, Emer Timmons, Chief Marketing Officer & President of Strategic Sales at Brightstar admitted that she is worried we’re going backwards, and highlighted the need to turn mentors into sponsors. Rimma Perelmuter, CEO of the Mobile Ecosystem Forum (MEF) agreed, saying she’d like to see an increase in the number of senior female leaders taking their social capital and investing it in someone they believe in. Many of the panellists encouraged existing leaders to take a risk, and to sponsor someone they trust. Lucy Quist, Managing Director (CEO) at Airtel Ghana agreed, saying that if you find someone you believe in, it’s important to fight their corner.

Quist explained eloquently that her perspective is one of “I am her and she is me”. She believes that female leaders should create highways for others, as normalising behaviour will give others the confidence to succeed. Quist explained that while it’s great to feel special, it’s even better when your achievements as a woman in tech are considered normal. Lauren Hurvitz, Global Chief Communications & Corporate Marketing Officer at Turner agreed, citing the two main factors that lead to women dropping out of the workforce as a lack of flexibility, and a lack of networking opportunities with people “who look like you”.

MEF’s Perelmuter highlighted that women often maintain a separation between their social life and professional networking, in a way that their male counterparts do not always do. This led to a broader conversation about efforts to prove capabilities. Mary Clark, Chief Marketing Officer and Chief of Staff at Syniverse gave an example of how instead of demonstrating social capital and connections, women often retaliate by trying to go above and beyond in proving their qualification for a role. This can lead to over-analysis of the next steps to take in order to have the best possible CV.  Clark suggested that we need to take some of that DNA and flip it – and start networking like men do. Christina Miller, President at Cartoon Network and Clark agreed that sometimes we find it hard to ask for ourselves, let alone for others. They came to the conclusion that rather than over-analysing every move, sometimes you just have to have the confidence to ask for what you want.

There are many excellent organisations worldwide encouraging women and girls to consider careers in tech (I volunteer with one of them - CoderDojo - in the UK). While these organisations are doing great things to expose girls to coding and the possibilities of STEM, for Renee La Londe, CEO and Founder, iTalent Corporation they also represent an important opportunity to empower girls and women in leadership. Quist, who is involved with Airtel Ghana’s ‘Evolve with STEM’ thinks that these initiatives are commendable just as much for the leadership platforms they offer as the technological skills they encourage. Coding clubs with female mentors can normalise women in tech, while students’ participation doesn’t necessarily demand a future career in STEM. Rather, these organisations demonstrate the importance of knowing what’s going on around you – something that any future role will also require.

Finally, we come to the silver bullet: the confidence to be a leader. Catherine Ladousse, Executive Director of Communication EMEA at Lenovo encourages future generations to have a different mindset, with self-belief in their leadership capabilities, and the confidence to ask for what they deserve. Quist echoed this, telling the room to “assume you’re going to be a leader” and prepare accordingly. Harmeen Mehta, Global CIO at Bharti Airtel believes that life is difficult for everyone, and it’s up to us to put ourselves on the map. Brightstar’s Timmons also encouraged strength and self-confidence, likening the glass ceiling that we are faced with to a mirror, with only ourselves holding us back.

And with a final promise for John Hoffman, CEO at the GSMA to hold the summit on the main stage next year, the day came to an end. As I write this on the eve of International Women’s Day, I am firmly of the opinion that events like Women4Tech are an important forum to involve both genders in discussions on how to move forward as an industry.

To those who still think the issue is redundant, I encourage you to attend Women4Tech next year and learn from it - judging from the packed auditorium, there is certainly an appetite for the discussion at Mobile World Congress.

To the female panellists who recognised the opportunity to leverage their positions of influence to shed awareness and to inspire other women in tech, I say thank you. After all, as panellist Anand Ramesh, Head of Publisher Partnerships, Americas at Twitter/MoPub concluded so beautifully: “You can’t be what you can’t see”. 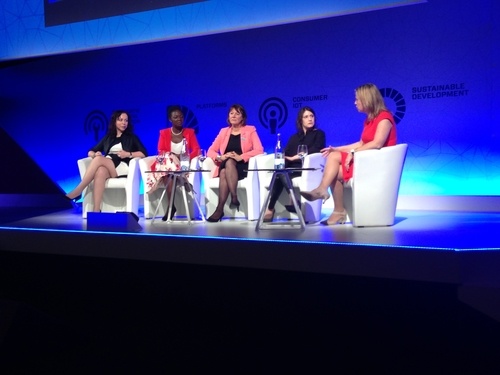