Measuring media relations: Why we should focus on Power of Voice

What is it and why is it useful?

Many companies measure at least part of their media performance by comparing their volume of media coverage to that of their competitors. This is called Share of Voice (SoV) and, while it is useful in gaining a partial view of your relative success, it is a little problematic. SoV only measures volume and treats all media coverage as equally valuable.

But not all publications have the same reach or influence. So it doesn’t make sense to measure them this way. Therefore, it’s important to segment higher quality media coverage and look from the perspective of Power of Voice (PoV).

PoV considers a select list of the most impactful and relevant publications which gives you a more accurate view of the quality of media coverage secured.

What can Power of Voice do?

By analysing a more focused group of media titles for coverage, you get a much better idea of the influence your company has in high quality media. However, it’s important to add that it’s not enough to look at this in terms of volume alone, looking at a smaller sample of media coverage enables you to pick out what kinds of coverage your competitors are getting and what types of stories thrive in the media allowing you to plan for future communications campaigns.

In addition to this, PoV also keeps your PR agency more accountable for the work they do. By setting objectives that look at PoV specifically, it encourages PR teams to seek out higher quality media leads than settle for the easy wins. 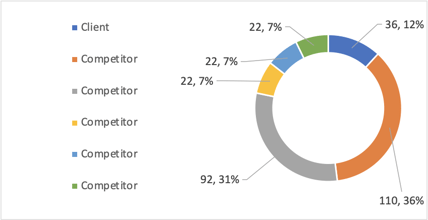 How do you implement it?

There are many methods to define what PoV is, but a simple and manual way to measure the impact of a piece of coverage is by tiering media lists. Tiering publications can follow the basic criteria below:

While it’s important to report on all media activity, only tier 1 media makes it into the PoV category.

Tiered media lists will change depending on which sector you operate in. For example, in one of CCgroup’s recent Insight Reports research we found that over a third of enterprise technology buyers used trade media when researching vendor suitability.

Mainstream media should also be included in tier 1 lists – because of their strong impact on SEO. Our cross-sector research indicates that one of the most powerful channels for influencing buying decisions are search engines. A significant number of investment decisions begin with a Google or Bing search.

How do you measure your Power of Voice?

Success in PoV and SoV is often measured by the overall percentage share. This is wrong. While it’s possible to influence the PoV percentage through coverage it isn’t an objective that can be controlled - a competitor’s coverage can go up and down for several reasons, some not always positive. This will impact your percentage.

Instead, when building objectives, PR teams should look at increasing the volume of coverage in tier 1 media which will in turn influence the PoV percentage share. By doing this you are delivering a KPI that is more measurable and achievable.

PoV is a much smarter way to measure media coverage than SoV. Not only is your PR agency taking the time to segment the most impactful media, it’s also giving you the assurance that you’re not wasting your PR dollars on media coverage that will reach small audiences and have little impact on your brand’s reputation.

Matt joined CCgroup after spending four years studying PR at Bournemouth University. Early on he showed an aptitude to integrating PR theory into practice and has been instrumental in CCgroup’s strategic and results-driven approach to measurement. When he’s not working, you’ll tend to find him travelling the world on his motorbike.