MWC Americas: ‘A step up’

The inaugural Mobile World Congress Americas is now over. As is often the case with trade shows, I find myself sat in an airport lounge, nursing a hangover, considering if it was all worthwhile.

I have never been to a CTIA show, and my colleague Rich last attended nine years ago. But we’d heard that it was getting smaller and fading fast. Certainly, it was in need of a ‘pick me up’, if not full rehabilitation. I have covered the details behind the GSMA and CTIA ‘partnership’ before - many felt it was a collaboration with exciting potential, but it also raised questions about where it would ‘fit’ in terms of overall GSMA priorities.

Mobile World Congress in Barcelona is the jewel in its crown, and fiercely supported by the same North and Latin American tech and telecoms giants that were asked to support the smaller, regionally-focused Americas version. Would they have the patience, the belief and the finances to back another expensive marketing vehicle? Would the GSMA’s involvement make a difference?

Yes, they would and yes it did.

That’s the combined opinion of the clients we supported, the media and analysts that attended, and the new people we met in San Francisco for the first time. Many acknowledged a ‘step up in quality,’ ‘added slickness’ and ‘better all-round production.’ As I said, we have limited experience of CTIA events so can’t really comment. I have been to roughly a gazillion GSMA events however, and this looked and felt like a GSMA event, because ‘partnership’ or no ‘partnership,’ it is a GSMA event (although massively light on the kind of shameless branding on every street corner in Barcelona).

The footfall in the exhibition halls was strong. The official numbers claim 21,000 people attended – which is up from about 17,000 from the CTIA event last year. The major operators and vendors were all there (although it was a strange experience being at a GSMA event not completely dominated by Huawei branding), and the leaders of many of these organisations were well represented on the conference agenda.

And for me, this is where the show really excelled. The content was fabulous. The access was impressive. Carlos Slim (he is one polished individual), Marcelo Claure, Sunil Mittal (yes, I know he and Marcelo had to be there, but still…), Rajeev Suri, Mary Clark (I’m massively biased, but you’re still welcome Mary).

The smaller conference sessions worked well. I thought those selected to moderate were particularly good. Carefully selected experts on various technologies and issues directed the right questions to the right people. I think this is where the GSMA has a clear advantage. They have achieved consistency in the themes and topics across its three major MWC events which gives the conference good structure and coverage. This is essential if these large international shows, like the MWC series, are going to deliver value and draw marketing spend from the more specifically targeted niche events. The GSMA can legitimately claim to cater for all audiences with content spanning technology, business and regulatory issues.

The sessions covering IoT, artificial intelligence, 5G, connected cars, mobile commerce and content strategies were all well attended. Those focused on sustainability did less well, but this is unlikely to prevent the GSMA from pursuing it as an important issue – nor should it.

Was it perfect? No, but then perfection is not a word often associated with trade shows. I know the Moscone Centre is in the midst of re-development, but Moscone West was very detached from the main event in Moscone South and North. In fact, when we first arrived, we started in Moscone West first, thinking it was the main hall, to be confronted by a lot of resellers, desperate for some company and a distraction from the surrounding tumbleweed. One particular reseller was so desperate for attention, it ran an open bar at 11am on the opening day. Desperate times and all that (we declined) …

The signposting could have been better to assist with navigation. Though by the end of day one, it got a lot easier. San Francisco could have been cheaper too. I spend most of my time in London. I thought we knew how to charge for things. $6 for a glass of grapefruit juice? $150 for dinner for two with one (average) bottle of wine? C’mon!

My favourite moments? As always these were tied to specific experiences shared with our many friends. Being stood next to the unconquerable, irrepressible and all-round fabulous Mary Clark, CCgroup’s client from Syniverse, when the UK’s Princess Beatrice stopped her in the aisle to add yet more polish to her already glistening halo. Kudos to all involved in the Women4Tech Summit (what Beatrice was referring to), it officially has royal approval, which is entirely warranted. In my opinion, it comprised the most impressive and inspirational speakers from the entire event (special mention to Melissa Arnoldi from AT&T… Wow…)

Then, there was my first trip to the Golden Gate Bridge and my inability to get a good photo because of all the mobile phone masts dominating the foreground (see below picture). The irony was not lost on me. And lastly, the look on the faces of my friends at the GSMA when CTIA CEO, Meredith Baker, described them as simply ‘handling the logistics for the event’ during her keynote… #awks

So, in summary, well done GSMA. A very enjoyable and engaging event. I guess the acid test is what happens next year. Will the ‘let’s have a look and see’ brigade return with equal force? Well I certainly hope to. I’ve never been to LA, seems like as good an excuse to address that as any…

Paul is COO and Head of Mobile & Telecoms at CCgroup. He has worked in mobile & telecoms PR and integrated communications for more than fifteen years. He is responsible for the daily operation of CCgroup and the management and development of CCgroup’s mobile & telecoms client portfolio. 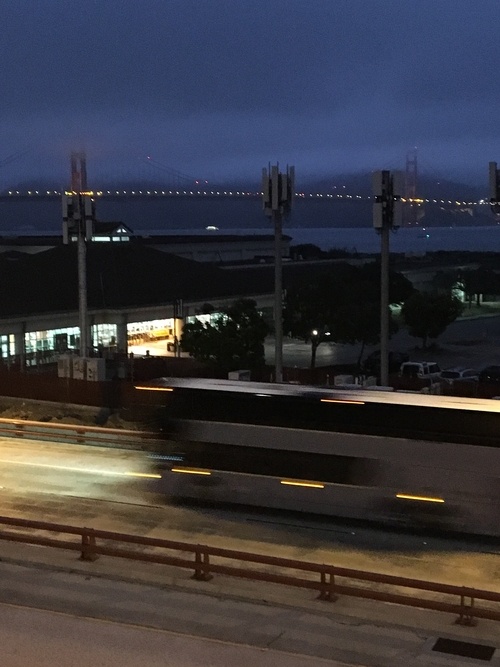